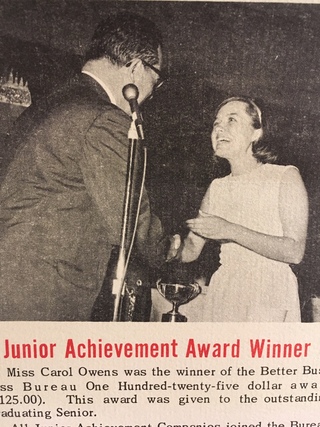 Carol's surprise at winning the inaugural Columbus, Georgia Better Business Bureau Award could only be brightened by the thrill of purchasing her first typewriter with the prize money. 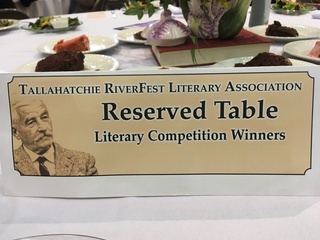 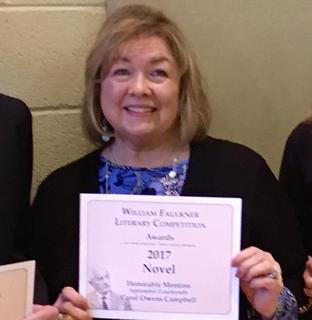 Carol and Ron Hansen, author of "Mariette in Ecstasy," "The Kid," and "The Assassination of Jesse James by the Coward Robert Ford," who was her 2018 Tucson Festival of Books Masters Workshop for Finalists Instructor and one of her favorite writers (and favorite people!), March 2018

1969: Winner of the National Teenage Volunteer Award from the March of Dimes, New York City, New York (based on volunteer work, recommendations and written essay on the “Walkathon to Warm Springs”)

1977-1978: Assistant to the City Editor of "The Houston Post" and Contributing Reporter to the "Action Line" column, Houston, Texas

1980-1989: Sales Account Executive, Consumer Products, Eastman Kodak Company, Houston, Texas (Created marketing campaigns, presentations and reports celebrating the launch of products and success of film sales for NASA, the Astrodome, the San Jacinto Monument and other important customers. Author of comprehensive report on the Texas Sesquicentennial on April 21, 1986 at the San Jacinto Monument where, months before, Carol met H.R.H. Prince Charles during the Sesquicentennial Celebrations.)

1987-92: CASA (Court-Appointed Special Advocate for Child Abuse Victims) A Volunteer in Houston, Texas and Long Grove, Illinois (Research and reports written and submitted to the Court on behalf of each child represented)

1995: Co-Author of VIEWS FROM A PIER with Griffin Owens Campbell, copyright 1996. (A creative non-fiction book encouraging the use of precise language to clarify and confront controversial issues in America. As current today as it was when published in 1996, the 181 page-book includes a peace accord for the abortion rights issue. Please see "Works" for more information. Thank you.)

2000-2005: Attendee at Writing Classes and "Write-By-The-Lake" at the University of Wisconsin, Madison, WI

2014: Publication in "One Trick Pony Review" of original poem titled, "Interview with a River" (Thank you to Marilyn Kallet for her generosity of spirit to shepherd this poem to publication.)

2014-2017: Publication of short stories and a poem in the Solstice MFA Program Anthology including "Interview with a River," "As Far as the Letter 'S'," and "When in Jeopardy."

2017: 20th Annual William Faulkner Literary Competition
2nd Place Prize in the Novel Category awarded to SEPTEMBER FOURTEENTH
(Among the comments by the Judges:
"This novel explores the maturation of a privileged young woman who must adapt her life as a Southern Belle to the changing culture of the 1970s. The author skillfully plays off scenes from Hamper University, a Georgia college the protagonist Tally attends, to Kent State University at the time of the deadly protests of the Vietnam War. This author addresses many of the issues of race and identity that Faulkner does in his novels.")

"The Moon and Sixpence" by W. Somerset Maugham
"The Member of the Wedding" by Carson McCullers
"To Kill a Mockingbird" by Harper Lee
"Remember Me Like This" by Bret Anthony Johnston
"Light in August" by William Faulkner
"The Great Gatsby" by F. Scott Fitzgerald
"A Pig in Paris" by Steven Huff

"Mariette in Ecstasy" by Ron Hansen

"Twelfth and Race" by Eric K. Goodman
"Fortunately" by Remy Charlip
"Princess Shayna's Invisible Visible Gift" by Sheila N. Glazov
"Bird by Bird" by Anne Lamott
"In Cold Blood" by Truman Capote
"Night of the Jaguar" by Joe Gannon
"Prodigal Sons" by Mike Miner
"Suitcase City" by Sterling Watson
"Eminent Maricones: Arenas, Lorca, Puig and Me" by Jaime Manrique
"The Scene Book: A Primer for the Fiction Writer" by Sandra Scofield
"Stay Up With Me: Stories" by Tom Barbash
"Madame Bovary" by Gustave Flaubert
"Day of All Saints" by Patricia Grace King
"Writing in General and the Short Story in Particular" by Rust Hills
"Running With Buffalo" by Michael Farrell
"The Choke Artist: Confessions of a Chronic Underachiever" by David Yoo
"HAMILTON: The Revolution" by Lin-Manuel Miranda and Jeremy McCarter
"Fields of Wonder" by Rod McKuen

"The Docks" by Joanne Carota

"Unfinished Business" by Isabelle Drake
"The Flame and the Flower" by Kathleen E. Woodiwiss
"Colored Sugar Water" by Venise Berry
"A New Hunger" by Laure-Anne Bosselaar
"Two for the Road: Adventures in Maine" by Tanya Whiton (Photographs by Heidi Killion)
"Revision: A Creative Approach to Writing and Rewriting Fiction" by David Michael Kaplan
"Farm Girls: Reflections and Impressions" by Candace Simar and Angela F. Foster
"All Back Full" by Robert Lopez
"The End of Baseball: A Novel" by Peter Schilling
"All the Numbers" by Judy Merrill Larsen
"The Art of Time in Fiction: As Long As It Takes" by Joan Silber
"Burning Down the House: Essays on Fiction" by Charles Baxter
"Humboldt: A Novel" by Glenn Vanstrum
"Cementville" by Paulette Livers
"The Never-Open Desert Diner" by James Anderson
"The Hard Way" by William Hastings
"The Secret of Me" by Meg Kearney

Weary of misperceptions about the South, tired of being dismissed as just a pretty "sorority girl" and frustrated by Southern traditions that keep the status quo intact, Tally vents her fury, within the society norms that bind her, after learning of the murders of four students, her peers, at Kent State University.

She struggles to win a scholarship to study at Oxford while competing against a shrimper's son who is a brilliant, young Black man. She experiences a level of intimacy she's never known before with her new boyfriend from New York. She also uses her awareness of Georgia's hidden history, as the only colony of the original thirteen to ban slavery in its royal charter, to take a stand against the military draft for Vietnam even as she is named the local Military Gala Queen.

In her political coming-of-age journey, Tally must determine what she believes, how she can use her restlessness to provoke change, how her privileged "status" may be the most original way to disrupt the "status quo," and how she can find the truth she craves in the creed she trusts: "The present has all the questions while the past has all the answers."

(*LOOK AWAY NO MORE is the title of the novel manuscript formerly known by the working title, SEPTEMBER FOURTEENTH.)